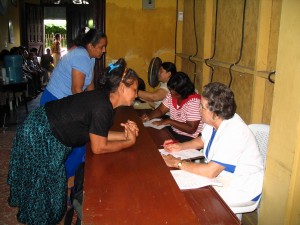 Vision clinics- We partner with VOSH-Southeast to provide vision care to people in need. Each trip, we hold vision clinics normally in two locations in the surrounding communities. The clinics are open to the general public in those areas, and is a first-come first-serve basis. Since 2004, we have served over 10,000 patients in vision clinics with screenings and eyeglasses.

Optical lab- BASIC Nicaragua started an optical lab in Chinandega, Nicaragua on February 1, 2014. We hired Jorge Garcia as our full-time optician. Since inception, Jorge has completed almost 1,000 pairs of readers. In fact, he’s made all reader lens blanks that we had in stock in to glasses, running himself out of work. We have a shipment of 15,000 pairs of lens blanks and frames on their way to Nicaragua in the fall which should keep Jorge busy for several years.

Once the bulk shipment arrives, Jorge will be creating an inventory of glasses available for sale to the general public and also for other VOSH groups completing missions in-country. Our intent is to eventually have a self-sustaining business that will pay for Jorge’s salary, future stock materials and donate a portion of proceeds back to the Mission Centre. We estimate it will take approximately two years before we are to that point.

During a recent mission trip, I had all doctors inspect Jorge’s completed readers. All doctors noted a high quality of craftsmanship, a quality control check confirmed properly labeled boxes. Doctors also noted that the frames were of high fashion and welcomed by all patients. It made for quick and easy dispensing knowing all glasses would be immediately accepted by the patients.

Below is a picture of Jorge at his workstation. He has decorated his lab with bible verses and reads the bible during his lunch break. Jorge loves his job. 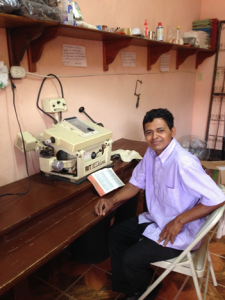 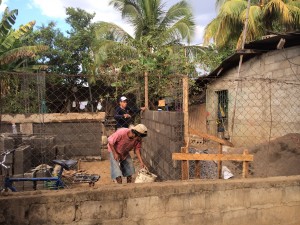 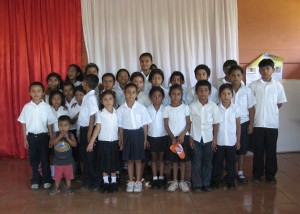